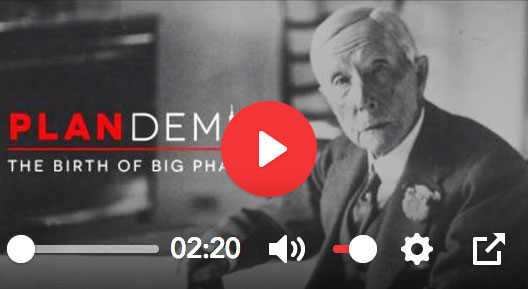 CLICK HERE to watch the following short documentary The Birth of Big Pharma (pandemic series.com). Scroll to the bottom of the opening page where you will find 6 shorts. This explains the history of Big Pharma and how Rockefeller leveraged his political influence to destroy natural healing modalities. You won’t be able to stop watching these so allow yourselves time.

“medicines used for thousands of years were suddenly classified as alternative, while the new petroleum based highly addictive and patentable drugs were declared the Gold standard…after buying the German pharmaceutical company that manufactured chemicals of war for Adolf Hitler, Rockefeller leveraged his political influence by pressing congress to declare natural healing modalities unscientific quackery…Rockefeller then took control of American Medical Association and began offering massive grants to top medical schools under the mandate that only his approved curriculum be taught. Any mention of the healing powers of herbs, plants and diet was erased from most medical text books.