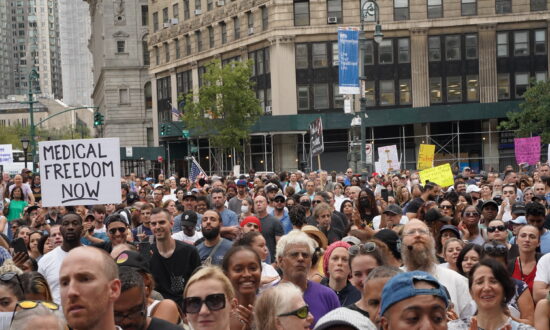 Seventeen medical health professionals had asked the court to enjoin enforcement of New York’s mandate that then-Gov. Andrew Cuomo announced on Aug. 16. The mandate required staff at hospitals and long-term care facilities such as nursing homes, adult care facilities, and other congregate care settings, be vaccinated for COVID-19 to continue to be employed.

The plaintiffs, including doctors, nurses, a medical technician, and a physician’s liaison, were facing termination, loss of hospital admitting privileges, and the destruction of their careers unless they consent to be vaccinated with vaccines in contradiction of their religious beliefs, the lawsuit argued.

Their religious beliefs compelled the plaintiffs “to refuse vaccination with the available COVID-19 vaccines, all of which employ aborted fetus cell lines in their testing, development, or production,” according to court documents.

The health care employees argued that the vaccine mandate would nullify protections for sincere religious beliefs under Title VII of the Civil Rights Act of 1964, even though the prior state health order in effect just days earlier had afforded the same protections. Specifically, they argued that the mandate violated the First and Fourteenth Amendments, the Supremacy Clause, and the Equal Protection Clause of the U.S. Constitution.

“What New York is attempting to do is slam shut an escape hatch from an unconstitutional vaccine mandate,” attorney Christopher Ferrara, Thomas More Society special counsel, said in a statement before the injunction was granted…….